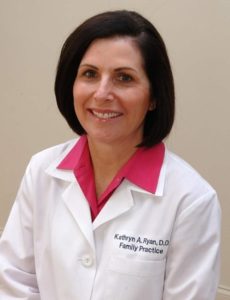 Dr. Ryan grew up in southwestern PA. She has lived in Butler, PA since 1995 with her husband and three children.

Dr. Ryan is a 1981 graduate of The Pennsylvania State University earning a B.S in Nutrition Science. She graduated from Philadelphia College of Osteopathic Medicine in 1985.

She did her internship at Portsmouth Naval Hospital in Portsmouth, VA and then worked as a General Medical Officer on the USS Shenandoah from 1986-1988, receiving The Navy Achievement Medal and Navy Commendation Medal for services provided to the fleet. She designed and coordinated The Surface Warfare Medical Officer Indoctrination Course in 1989 for physicians prior to shipboard assignments.

She resigned her commission and moved to Michigan to work as a Family Practitioner for a Health Maintenance Organization until 1995. She then relocated to Butler, PA to be closer to her family. She worked for Butler Medical Associates and has been a Family Practitioner in Saxonburg since 1998. She has been self employed since 2002.

Dr. Ryan is on active staff at Butler Memorial Hospital and is licensed in the state of PA. She is Board Certified in Family Practice by the American 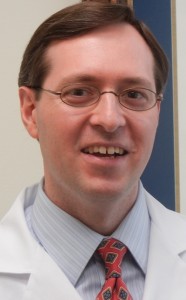 Dr. Oniboni grew up in northwestern PA.  He has lived in Butler since 2005 with his wife and five children.

Dr. Oniboni has been a Family Practitioner at Kathryn A. Ryan, D.O. and Associates since 2005.  He is on active staff at Butler Memorial Hospital.  He holds memberships in the American Osteopathic Association, American College of Osteopathic Family Physicians, Pennsylvania Osteopathic Medical Association and Pennsylvania Medical Society.